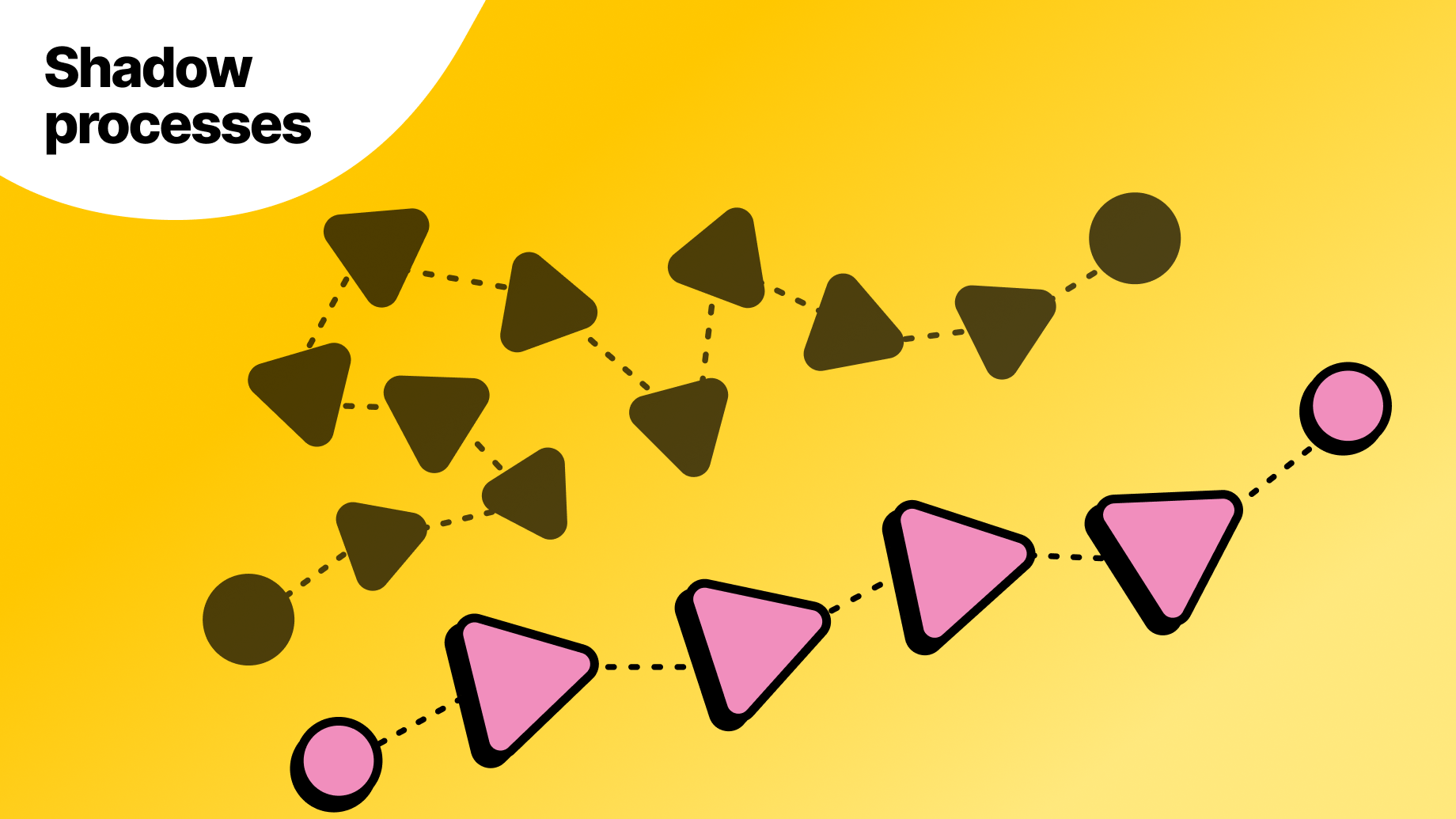 What are shadow processes?

Like the word sounds mystical, shadow processes are the type or category of the processes that are not easily found, specified, and revealed.

Companies have long been trying to see what digital work looks like inside the organization. Many different methods have been used for that purpose: special consultants mapping processes, software, process and task mining, and other workflow building tools. However, a fraction of the processes would still remain undiscovered.

How are shadow processes created?

There’s always a happy path to how the process should work. It’s usually documented and outlined, like onboarding the new colleague by an HR or monthly close process by Accounting. However, sometimes “happy” path doesn’t work the way it should in real life. Some deviations and workarounds modify the process from what it’s supposed to be.

Shadow processes are hidden processes that need to be done but are not documented. They overtake the main process and add non-documented random stuff and ad-hoc work. For example, the Accounts Payable unit is involved in invoice processing. However, it ends up doing many small tasks that are not specified anywhere so that work would flow further. As a result, it ends up being much more complex than initially supposed to be.

These hidden processes might be very versatile. They’re those minor fixes in the middle of the main process or tiny variations from the task that we unwillingly end up with. Shadow processes are often the small procedures people create over time without even realizing it. Unfortunately, it might easily add up into a big chunk of time when combining all the variations from the whole team.

Where do variations in the process come from?

Why are shadow processes dangerous?

As one might guess, these shadow processes steal a lot of time. They might seem critical to work, but that’s just because people are used to doing them for a long time. When rebuilding and going through the processes again, they prove to be redundant in many cases.

Shadow processes halt other projects, for example, digital transformation. They usually get undiscovered because they can’t easily be detected and are not within IT systems. They accumulate and grow fast, making them even riskier for the overall work.

It’s easy to overlook these shadow tasks because they are not the core parts of the work and might not account for their large portion. However, it’s these small hidden processes that steal the time, prevent the flow, and go neglected.

How to discover shadow processes?

The short answer is - know what your work looks like. Beyond processes. Beyond tasks. Beyond workflows. Know every part of it on a team level to see the real root causes of these shadow processes.

It’s always tempting to jump straight to automating the obvious stuff and getting immediate rapid gains. However, is that the right choice in the long run? What if what seemed to be the reason for shadow processes to appear has other underlying root causes instead?

It’s necessary to have a holistic view of the whole process - not only formal documented processes but also shortcuts, workarounds, and ad-hoc activities.

Want to see Workfellow in action?

You're just a step away from complete visibility on work.